The Sultana Bran Hockey One League is back in 2022 and the NSW Pride are gearing up for a massive second season following the release of the season fixtures and our membership packages.

For the very first time, the competition will head regional with the NSW Pride’s first home game set to take place at McGlynn Sports Complex in Parkes.

A hot-bed for hockey talent in NSW, Parkes will host the Pride’s final round home-game clash with the Canberra Chill on November 12th in front what is expected to be a sold-out local crowd.

Local Parkes products, Hockeyroo Mariah Williams and Kurt Lovett from the Kookaburras will be fan favourites as they run out onto the field named in Mariah’s honour.

But before that, the NSW Pride will host back-to-back rounds at their Sydney Olympic Park home – the Lion’s Den –  against the Perth Thundersticks (21/10) and Brisbane Blaze (28/10). 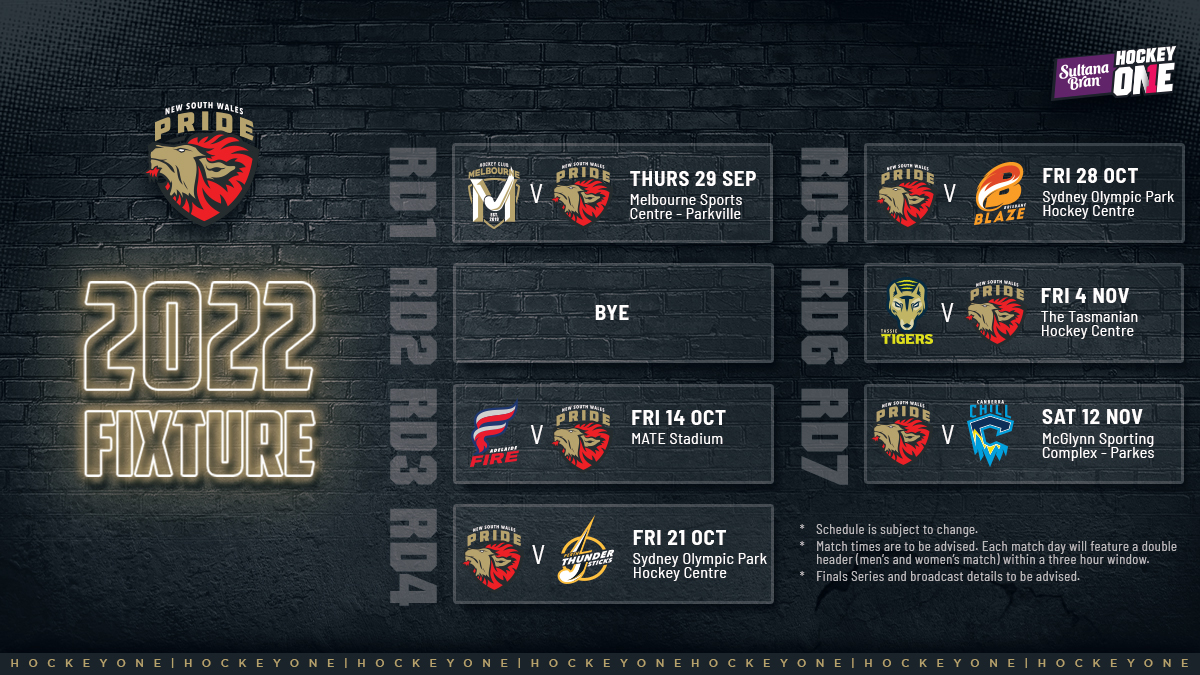 The Friday night game against the Blaze will be a heavyweight match-up, with the 2019 men’s grand finalists squaring off against each in a replay that is sure to fiery.

In a much-anticipated away game, HC Melbourne will host the NSW Pride in the opening match-day of the 2021 season on Thursday September 29th at the State Netball and Hockey Centre.

Our teams will head to Adelaide and Tasmania for their remaining away-games of the season in what are sure to be fiery clashes in front of big local crowds.

After COVID caused the postponement of last two editions of Hockey One, the 2022 season will start from the September 29th and culminate with the men’s and women’s grand finals in November.

The season will again feature seven home-and-away rounds and a finals series, with every match-day featuring a men’s and women’s double header played back-to-back.

Hockey NSW CEO Emma Highwood is incredibly excited about the upcoming season and the opportunity to take the NSW Pride to regional hockey fans.

“After a long hiatus, it’s fantastic to finally get the 2022 season Hockey One season rolling. We’re on a mission to make it bigger and better than ever – both on and off the field,” said Highwood.

“The NSW Pride are a team for the entire State to get behind, so it’s really exciting to be taking one of our home games to the great town of Parkes. Nearly 70% of our hockey community in NSW live regionally, with a large percentage of those based in the Central West. So it made sense to take one of home games to a passionate regional hockey centre.”

NSW Pride memberships for the upcoming season are now on sale. Reserve your spot at our two huge games at the Lion’s Den in Sydney Olympic Park or grab a supporter membership to show your colours and get access to a great member pack full of Pride goodies!  Click here to purchase your 2022 membership.

For more details on the 2022 Hockey One season and information on tickets and team news, make sure to stay tuned here on our official team website.